So this is our fourth visit to Ile du Levant.

Our first time was in 2004.  A day visit as it was.  Out on the first ferry, back on the last ferry.  It was all very confusing, and a bit overwhelming, but just intriguing enough to make us want to come back. 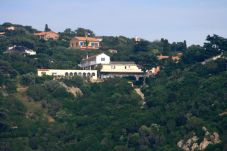 On our second visit in 2006, we would stay at Heliotel, having made arrangements with a woman named Lucie who secured our reservation, but our command of French and her command of English ran out shortly beyond that exchange.  We had a good stay, but didn’t know how to ask for a fan to cool down our room and rescue us from the mosquitoes.

Our third stay was in 2010 at the Hotel La Brise Marine, near the crest of the western end of Ile du Levant.  We brought our two young adult daughters with us for an intended three-night stay, but bailed after the second night, succumbing to the heat and the malicious mosquitoes, while picking up on an uncomfortable (at least!) libertine vibe going on about the place.  Not sure if that’s always the feel about the place or whether we just had bad timing, but we left feeling a bit discouraged, but not so much so that we wouldn’t try it again…

This time, we’re back at Heliotel, where the new owners have brought a new sense of panache to the place, along with air conditioning and new bedding!  All around, I’m guessing it’s the best stay on the island.  I would consider a self-catering apartment, but probably not in July or August when the nights are, more often than not, humid and still.  (Which, of course, takes us back to the pesky mosquitoes!)

I know I belabored this point a good bit in my last post, but I still find the most intriguing (and in this case, intriguing = confusing) attribute of this little naturist island to be the naturism itself.  Having visited several naturist resort type places in France, as well as making attempts to negotiate the French naturist forums like VivreNu, there is clearly a sense of urgency, or a least esprit de corps, embedded in the French naturist movement.  Resorts like La Jenny and Bélézy have mounted serious marketing campaigns to discourage holiday-makers who are seeking a “clothing-optional” vacation.  “If you want to come here, we want you to be naked…  and LIKE it!”  Over the years, we’ve even seen signs go up on the property of such places that essentially say, “You’re at a naturist place – take your clothes off!” 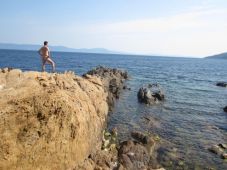 But here on Ile du Levant, such rigorous pomp and circumstance seems too militant; obsessively diligent, peut-être.”  Having just returned from a fabulous lunch at La Palmeraie, I am still puzzled by the fact that we were the only ones dining completely au natural on the Terrasse Naturiste.  Our lack of attire did not even draw a second glance from the server or the other patrons, and indeed, the older man at the next table was wearing le minimum of the G-string variety, which I find one step beyond peculiar as compared to naked.

It occurs to me also that I may simply be acting overtly American even taking note of such things.  There is a competitive edge inherent in people from the US that causes them to seek out the maximum result from every effort.  Climb the highest mountain.  Run the longest marathon.  Get the best job.  Ride the biggest Harley.  Go to the nakedest place!  It could simply be, sometimes, that getting naked is more of a bother than wearing clothes, so why bother?

That said, of our four visits spanning nearly ten years to this little Mediterranean paradise, we have seen more naked people representing a broader demographic than on any previous visit, including several younger (under 40) couples and families with small children.  And the ‘naked when you feel like it rule’ seems to be the governing principal, whether that be a restaurant server who wears short, short shorts, or another who wears no pants at all.  Expecting the unexpected has become our main expectation for visiting this place, which makes it all just alluring enough to make us want to do it again… and again.

It is worth reiterating that the other thing that sets Ile du Levant apart from some of the other French naturist places we’ve visited is how very, well… FRENCH it is!  Having a few important phrases in the language has been helpful for sure, but we met a guy from the Midwest yesterday who had no French at all, and he seemed to be doing just fine.  For the most part, people are friendly and laid-back here, in a Bohemian sort of way.  Even if you don’t have a single word in common, somehow you’ll figure out how to order a sandwich and a pichet de vin rouge.  A couple glasses of wine, and the realization that you’re talking to your server while completely naked, will either put an end to your anxiety, or send you over the edge.

After years of dreaming about it, and many months of intense planning and preparation, we have finally set off on our naturist odyssey, with our first stop at the legendary birthplace of French naturism, Ile du Levant.  A remote little island off the Cote d’Azur, roughly 45 minutes by ferry from the seaside resort town of Le Lavandou (about half-way between Toulon and St. Tropez).

It is difficult to imagine a more idyllic place than this, with stunning views of the Mediterranean Sea from nearly every window, and only a half-dozen or so motorized vehicles in the entire village of Heliopolis.  There are a handful of hotels, several very nice restaurants, innumerable self-catering houses and apartments, and amazingly enough, private residences where apparently some people find the conditions suitable for year-round living; difficult to fathom what it must be like here in January with sleety rain and temperatures near freezing.

But in the summer, it’s mostly blazingly sunny days and deep blue skies; most definitely conducive to dawn-to-dusk nudity, which is allowed throughout the entire village except for right at the port or in the center square of the village.  Seemingly naturist nirvana!  But before you go out and buy a condo here, (or even venture out on a daytrip) you might want to consider a few peculiarities about the place.

First of all, how’s your French?  Mine isn’t very good, but “Je parle un peu le français!”  Already put to the test many times over, but most memorably in the boulangerie on the village place that also makes sandwiches and pizzas to “take away.”  After an awkward verbal exchange, I realized that pizzas can only be had in the evening, and with two hours notice.  Similarly awkward conversations would occur this day at the jewelry boutique and the little ‘catch-all market’ that is essentially a mini-Walmart, but with only one of each item you might have forgotten on the mainland before embarking upon the boat to naked wonderland.  It took more vocabulary than I possess for the cashier to explain to me that I could have the naturist magazine I had chosen “as a gift – un cadeaux,” since it was from last year and who would want to pay good money for that?

Our room on the island is at Heliotel.  We stayed here once before, back six or seven years ago, but the weather was blisteringly hot that summer, and our room had neither air conditioning nor a fan.  Today, Heliotel is run by Paul and Vincent.  Paul seems to be in charge of all things hospitality (and speaks beautiful English), and Vincent is apparently the culinary genius that is the lifeline to the lovely little restaurant with an amazing sea view!  Most importantly, the rooms all have air conditioning now, which is partly about managing the heat, but more about managing the mosquitos, which tend to come out with a vengeance at sunset.  Naked and mosquitos are a poor recipe for anything short of annoyance and grief!

The other peculiar thing about Ile du Levant is figuring out when and where you can be naked.  You would think that would be pretty simple and straightforward in the birthplace of European naturism, but as it turns out, it’s all a bit hit and miss.   In fact, it’s surprising how many people wear clothing on Ile du Levant, as it is actually only required in a few very specific places: in the port where the ferry arrives, in the town center which is essentially a small area of perhaps 100 square meters, and very particular places, such as the outside veranda of our hotel restaurant at dinner time.  (But you can have breakfast and lunch au natural on the terrace near the pool!)  Normally, you could simply default, “We’ll do what the locals do.”  But we didn’t travel 4000 miles to walk around a naturist village wearing shorts and a sarong.  By and large, that is what the locals do!  But alas, just when you think you’re the only naked person on the island, you meet up with an entourage of naked French people swimming in the sea, or walking back from the beach.  So we exercise the right (and rather expensive privilege) to be naked whenever possible.  Seems that even when somebody breaks the rules, by say… being naked in view of the port, nobody much cares.  But it’s all very confusing if you’re a naked American trying to do the right thing amidst the locals. 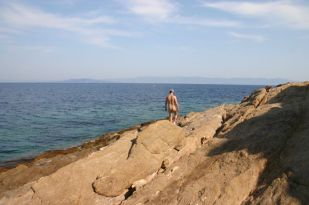 Tonight we’ll eat at a favorite restaurant we have visited on past expeditions to the island.  New owners and a new name but excellent reviews on Trip Advisor, so we are eager to see what’s on offer.  A long morning walk along the sea, an afternoon of snoozing naked in the sun, and the current prospect of a fine French meal and a bottle of red wine.